Start a Wiki
Mary is the titular characer of the 3rd Chapter of the 1st Manga. She is an old doll that has resided in Rika Andou's classroom for several years.

Mary resembles a china or victorian ball-joint doll with glass eyes and several lashes, and she seems to wear a small amount of makeup. She has long hair worn in curled, separated pigtails held by striped ribbons to match the one around her neck. She wears a dark colored frilly dress with tights and Mary-Janes.

As a human, Mary looks the same but with a casual outfit and the gem or brooch from her original dress.

As a doll Mary did not appear to have much emotion. But during the last few pages of her being human, she is shown to be delighted by food and eating in general- saying she likes everything "her mother" prepared. She shares her same views, in that eating is a necessity.

Rika bumps into Mary after complaining about the raisin bread her teacher forces her to eat. Seeing nobody around she offers the bread to Mary as a little joke, but to her surprise she returns to find half of it missing. One of her classmates claims it must thave been her and he recalls hearing a rumor that Mary eats things when nobody is around. While nobody buys the story, Rika decides to grab Mary and brings her home, where she devours the food her mother prepared for dinner and proceeds to continue eating foods Rika doesn't want. However, nobody knows its her doing, and soon she begins to look entirely new- much to Rika's confusion.

Eventually she begins to feel guilt for being deceptive and she returns Mary to class and tries forcing herself to eat everything on her own. Initially this seems to be good, but after finding Mary attack her items after a strange occurrence, Rika assaults her after realizing she has become doll-like and runs away for home. But to her horror Mary is already there. She then hears a heartbeat coming from the doll as her own begins growing weaker.

After awakening Rika assumes she was having a horrible dream until realizing she can't move again. She sees Mary, now a human girl walk into the room and addressed as "Rika" by her mother. Mary is delighted by the food and compliments it before sitting down to start eating, where she makes a single remark. 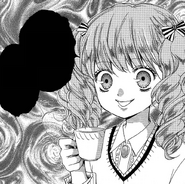 Mary as a Human Girl

Add a photo to this gallery
Retrieved from "https://zekkyougakkyuu.fandom.com/wiki/Mary?oldid=4806"
Community content is available under CC-BY-SA unless otherwise noted.