Start a Wiki
Mina "Mii" Okamoto is the sister of Haru and daughter of Mr. Okamoto and Mrs. Okamoto. She shares the role of Protagonist with Haru in the 27th Period of the series/third chapter of the 7th manga.

She is a young child who often cries and is spoiled by her parents.

Mina has medium-length hair worn loose with pigtails held by clips or ribbons. Her bangs are choppy and end above her big, rounded eyes with a slight curve. She wears cute children's clothing.

A naive and innocent child, Mina adores her family and loves being doted on and playing with Haru. She is very sensitive and easily cries, although she isn't able to comprehend very much as a three year old; like threats Haru makes and how she shouldn't imitate them. However it is ambigous as to whether or not she was purposely trying to hurt Haru after their bodies were swapped.

Mina had been in the middle of another tantrum while waiting for her mom to get home from work. Haru, tired of it threatened Mina after hearing a story on television but Mina hadn't been able to understand her. Just then their mother arrives, and Mina eagerly ran into her arms as she made her way to the kitchen, informing the girls that she planned on making stew for dinner. Mina resumed crying after Haru threatened to throw away one of her toys like her mother did in the past, ending with her being slapped. As Haru wept throughout the night, Mina peacefully slept with her parents.

The next morning Mina, having wet herself cries and runs into the hallway as the rest of the family show up wondering what was wrong with "Haru". As she tried to make sense of what happened, Mina stood in the hallway and spied on her family before attempting to reveal that she was actually Mina. Her parents assumed she was only joking though, and she sadly observed Haru who had been enjoying herself for the time being. This continues until her mother leaves, when Haru offers to play house with Mina knowing she would feel better, but once she agrees Haru decides to give her a taste of her own medicine by throwing a tantrum like Mina normally does.

Seeing the large kitchen knife nearby, Mina tells Haru that she "must be punished" and grabbed her arm, preparing to hurt her when their mother suddenly arrived and hit her hard enough to make her release her "little sister". Mina is reduced to tears again and is yelled at, and she continues crying her eyes out in Haru's bedroom until suddenly going quiet as she realizes something.

A while later Haru wakes up to find Mina carrying her into another room. As they pass by their sleeping parents, Haru can only react with alarm as Mina smiles and tells her of her plans to dispose of her. She reminds Haru of what she said the day before when she tried to throw away her doll, then shoves tissue into her mouth so that she can't call for help before holding her over the ledge of the small porch outside of the window.

Suddenly, Haru is thrown back and she sees that she is back in her body. But to her and her parents horror, they see Mina plummet to her death and scream out in fright. The following report mentions that her body had been found in several pieces, and due to the suspicious death there was a following investigation out of concern she may have been abused. 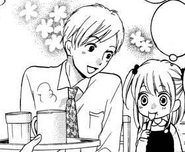 Add a photo to this gallery
Retrieved from "https://zekkyougakkyuu.fandom.com/wiki/Mina_Okamoto?oldid=5031"
Community content is available under CC-BY-SA unless otherwise noted.