Start a Wiki
Yomi or Yumi Akimoto is the ghost of a dead schoolgirl who haunted her school. She is the narrator of the "Screaming Lessons".

Yomi has long, wavy brown hair and gold cat eyes. She usually wears a black or blue high school uniform with a pectoral red bow tie. She has no lower body, with the remnants of flesh beneath her navel partialy burnt and tattered.

As Yumi she looked the same but had normal eyes and a whole body.

A creepy spirit who loves equally creepy tales. At times she can appear cool and stoic, or playful and friendly. She despises bullies though, and is likely to show kindness towards those who are thoughtful and nice.

Yomi was once a normal school girl, but she was bullied by all the girls in her class when the teacher wasn't around. One day, when Makoto Housoka helped her, causing the girls to start bullying both of them. The leader of the clique wanted her to choose between bullying Makoto or being bullied herself. Yumi, with a tear -only seen by Makoto- threw Makoto out the window of the home economics room, letting her land on a window, bleeding. After she told Makoto "if there's only these two ways, then I'm choosing this one", she closed the window and blew herself and the whole classroom up. All were in a critical condition, except the leader of the clique and Yomi, (her lower body was blown off and never found) who were killed. Makoto kept Yumi's shoe that landed on the roof next to her.

Yumi was reborn Yomi, where she still inhabits the room where she killed herself and the leader of the clique. It set off rumors about a ghost girl without her lower body who killed anybody who saw her. However, that rumor was proven to be false when Yuu Mizuki saw her and wasn't killed. He later tried to make her leave with salt from the shrine behind the school, but failed; in the process realizing that Yumi wasn't evil, but very sad. Mizaki tried various ways to cheer her up, always failing but eventually managing to make Yumi smile when talking about his childhood friend (Shiori).

Unknown to Mizuki, Shiori was a victim of bullying. One day, her bullies stripped the shrine of it's charms because they were going to force Shiori to take a picture of Yumi, which she refused to do. Because she refused, they tried to make her take her clothes off; a boy was about to when Mizuki arrived in the nick of time. Enraged, he beat up the boy.

As Mizuki was about to hit the boy with a wooden stool, he locked eyes with Yumi, realized that she must have felt like that before she died, when she was protecting her friend, and wondered if he could see her because they were similar. Just as he was going to deliver the blow, a wind rushed in, breaking the windows and blowing the door open.

Everyone was scared, but only Mizuki could see the black fog slowly enveloping the room. It was the angry spirit of the shrine coming to eat them because they had stolen its charms.

Smiling, Yumi told Mizuki that he was different from her; he was of this world. She told him not to be consumed by rage, try to end everything and end up like her. She then bid him goodbye, and sealed the shrine spirit in her. This act gave her the golden cat-eyes.

When everything had settled down, Mizuki returned to the room; he thanked her and vowed to see her again. Yumi was there, but he could not see her anymore.

After he left, the sealed spirit spoke to Yumi: asking her why she stopped it and warning her not to get so full of herself. It threatened her with what it would do when it got out, but stopped halfway and promised to stay with her forever. Yomi vowed to show the darkness of humans in a classroom full of fear; giving birth to the "Screaming Lessons". 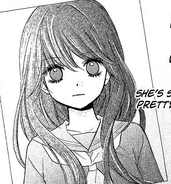 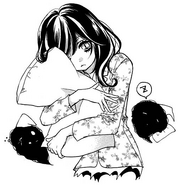 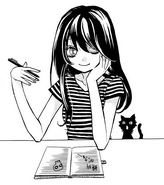 Add a photo to this gallery
Retrieved from "https://zekkyougakkyuu.fandom.com/wiki/Yomi?oldid=5053"
Community content is available under CC-BY-SA unless otherwise noted.